NOTE TO PLAYERS: Sometimes, the cards may get stuck so that clicking them will only cause them to fidget and not move. Try clicking the selection text to select an empty set. The game will complain and allow you to reselect, which should work this time. I do not yet know what causes this issue, but you can be assured that it is a known bug.

You ever wanted to try the classic Finnish card game of Paskahousu (lit. shitpants)? Now is your opportunity to do so. You will play against two (that's right, not one but TWO!) AI players of varying nature. Be careful - some of them may even cheat! (alas, they should not commit illegal moves - if they do, let me know!)

This game has been implemented in Pixi.js and Typescript (with a dose of Lodash). I had wanted to make a game outside of academic assignments for a fair while, and recently opportunity arose to make that happen. This is my first entirely self-designed game - I hope you enjoy it!

Each player is dealt five cards in the beginning. The objective is to get rid of your entire hand. The game is played turn by turn, and the first one to get rid of all their cards wins.

The starting player is the one with the largest amount of 3:s. If this does not render an unambiguous result, then 4:s, 5:s, et cetera.

After each turn, you will draw cards from the deck until you have at least 5 cards.

You can place cards on the pile as follows:

If you are unable to place a card, you must take the entire pile to your hand. You may also do this voluntarily at any point instead of placing a card. If nothing in your hand fits, you may also attempt a last chance, publicly drawing a card from the deck. If this succeeds by the card being appropriate for the pile, your turn immediately ends. 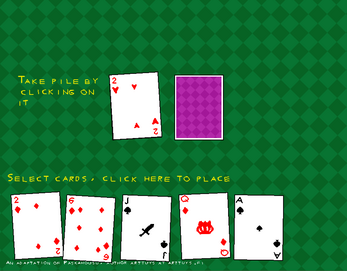